A gloomy day at the stock market. The AEX (-0.2%) is slightly lower, but there are no major outliers in the Dutch main index. At first glance, not much seems to have happened, but appearances can be deceiving.

Let’s take a look at the AScX (-0.8%), we see that Accsys (+7.2%) has closed sharply higher, and that without news. However, the volumes were almost three times higher than on a normal day. The cause may be found in the crypto world. It is quite possible that Accsys is confused with a popular crypto coin. This crypto coin, Axie Infinity, shares the same ticker name (AXS) and has skyrocketed in recent days.

A stock I watch, Accsys technology (a wood company), has shot up on no news. But it has the same trading code (AXS) as a crypto coin that has shot up 40% in the last 24hrs.https://t.co/kEOji5aOUD

I’m wondering if my wood co is going up on code confusion.

It wouldn’t be the first time ticker names have been mixed up. For example, can you remember Elon Musk two years ago ‘useSignal’, referring to a messaging app. In a blind panic, many of Musk’s followers bought shares of the completely unrelated and small company Signal Advance. The price therefore unintentionally jumped 438% in one day.

Google is having a hard time

Bloomberg reported today that the US Justice Department Alphabet (-0.6%), Google’s parent company, is going to sue. The reason is the dominance of the search engine giant in the digital advertising market. Now we also know that Google has broken into a sweat because of the new ChatGTP, a possibly superlative search engine. Perhaps ChatGTP can limit Google’s dominance a bit.

The latest insights into the development of the global economy are somewhat more positive than earlier ones. This indicates, among other things, that the eurozone will most likely narrowly avoid a recession. And while economic growth of just 0.1% is certainly not sustainable, this is a significant improvement over previous projections of a contraction of 0.5 to 0.8%.

Both traditional temporary employment agencies and secondment agencies as Brunel (+1.8%) obviously benefit from economic growth, although more variables play a role. The volume of the temporary employment sector will probably contract slightly this year as a result of a cooling economy and a shortage of personnel. IEX analyst Martin Crum tells you all about it in his analysis of Brunel.

Colleagues Jasperien van Weerdt and Niels Koerts recently paid a visit Alfen (+3%) to speak with CEO Marco Roeleveld. Alfen is a very interesting company. Since the IPO in 2018, the share price has traded more than eight times. The company has great ambitions to respond to the energy transition. How does Alfen stand up against the increasing competition? You can read it in this extensive interview.

Not much commotion on the interest rate market. Below are today’s 10-year yields. 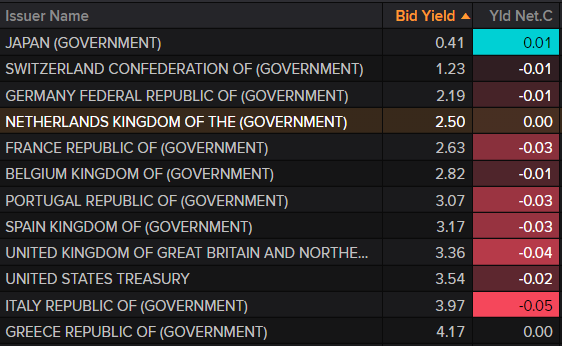 Coen Grutters is editor of IEX. The information in this column is not intended as professional investment advice or as a recommendation to make certain investments. Click here for an overview of the investments of the IEX editors.