A video shared thousands of times in several languages ​​since February 2022 shows a TV report with lifeless bodies in the background – one of which begins to move. One version of the video includes added text and an audio clip about war victims in Ukraine, which Facebook users present as “proof” that news channels are staging the Ukrainian conflict. Earlier this year, the same recording was presented as evidence of misleading media coverage of the coronavirus pandemic. However, the original news story is about a protest in Vienna against climate change and is not related to COVID-19 or Ukraine.

“Disastrously failed propaganda video on Polish TV,” is the description of this video in the Facebook group “Peace with Russia” of March 2, 2022. The video shows a German-speaking reporter and there seem to be dead people in body bags in the background. One of them moves, indicating that they are not actually dead.

The same recording appeared in other Facebook posts (here, here and here), but with the added news banner “Ukrainian Ministry of Health: 57 dead, 169 injured in Ukraine as Russia attacks” with an English-language voice talking about casualties, “fierce fighting” and the advance of “Russian troops” in Ukraine.

Screenshot of one of the deceptive posts on Facebook, captured on March 9, 2022

Russia invaded Ukraine on the morning of February 24, 2022. On March 9, the UN confirmed 1,424 civilian casualties in the country, with 516 dead and 908 injured. The Office of the UN High Commissioner for Human Rights “believes the real numbers are considerably higher”. More than 2 million Ukrainians have been displaced since the start of the conflict.

The video has been circulating since the beginning of February 2022 in several languages, including Dutch, Spanish and Polish, bearing different claims. AFP previously debunked the false claim that the video showed fake corona deaths. The original (unmanipulated) Austrian news report correctly described the event as a demonstration against climate change and never linked it to COVID-19 or Ukraine.

Current version with references to Ukraine has been manipulated

The recent version of the video with references to the Russian invasion of Ukraine has also been verified by several fact-checking initiatives, such as by DPA. The English voice says, “We’re going with [het woord] “at least”: at least 59 people killed, at least 149 people injured. Those numbers are going up.”

The misleading version on Ukraine also includes an English text in a white banner: “Ukrainian Ministry of Health: 57 dead, 169 injured”. By searching for this text on Google, AFP was able to find results under the category ‘Videos’ from the American news channel NBC. In this video from February 25, 2022, we can identify the exact same audio from 12:20 am by the reporter Cal Perry. The video was also found by Seana Davis, a Reuters news agency fact-checker.

This means that an unknown person has combined both fragments in an attempt to make Western media reports about the conflict in Ukraine appear untrustworthy and manipulative.

The original TV report, however, is about a protest on February 4, 2022 against the lack of national targets for reducing greenhouse gases in Austria and was organized by the ecological group “Fridays for Future”. It is unrelated to the corona pandemic and “the dead bodies are intended as a symbol,” an organization spokesperson told AFP.

The words “Wien: Demo gegen Klima” are visible in older publications of the video, which is the first indication that it is a recording of a climate demonstration taking place in Vienna (“Demo” means “demonstration” and “Klima” means “climate ” in German). It led AFP to the original video from Austrian news channel Oe24, which was published on their YouTube channel and on their website on February 4, 2022.

We can see that the white news banner about Ukrainian victims is not visible in this original version.

The video clearly shows that living people lie on the ground and are covered with black sails. From 1:24 am in the original TV report, one of the contestants has trouble keeping the sail in place because of the wind. 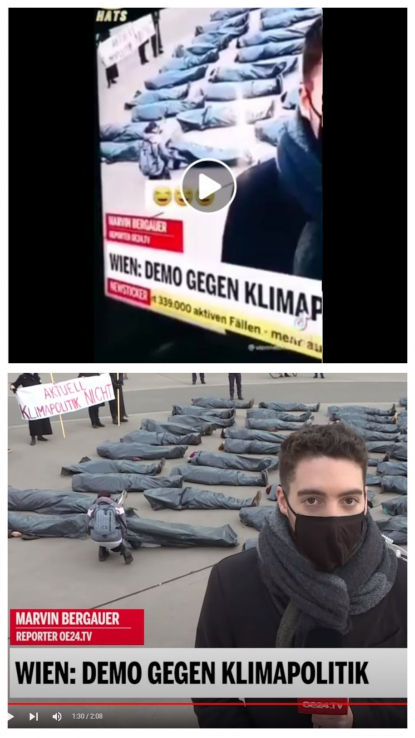 Screenshot of one of the misleading Facebook posts (top) and the TV report on the Vienna protest by Oe24 (bottom), taken on February 8, 2022

Austria has been without greenhouse gas reduction targets for 400 days since Friday (February 4, 2022, ed.). The platform Fridays For Future warned that this was fatal, that with every tonne of CO2, the climate crisis escalated. body bags’ for the Federal Chancellery in Vienna,” reads the article in Oe24.

The Austrian branch of the climate movement announced the protest and explained it on its website (here and here).

“There is no connection with COVID. It is purely about the climate crisis. The corpses are intended as a symbol, not with the intention of showing real corpses,” Verena Matlschweiger told AFP on February 8, 2022, speaker for Fridays For Future Austria and co-organizer of the action.

The organization shared photos of the protest on social media. “During a Fridays For Future campaign today, activists lay ‘dead’ in front of the Chancellery. They symbolize the people who will die as a result of the failure of Austria’s climate policy,” they explained. on Twitter† Images were also shared on Facebook on February 5, 2022.

The action was also reported by various Austrian media, such as here, here and here.

These publications are part of a larger trend in which Western media are falsely accused of deception. AFP showed that the news channels have accurately reported on specific cases, but manipulated and misleading content on social media tries to discredit their work. Examples are this manipulated screenshot of a message from RTL Nieuws, fake accounts on Twitter that imitate CNN and the unsubstantiated claim that Bild used old images in his recent coverage of the conflict in Ukraine.