The first election debate was organized on 24 February by Cultuurcafé De Ronde Venen. An evening full of debate, musical intermezzos and questions from the artists present. The entire broadcast is here to look back.

There is an energetic atmosphere in the Old Parish Building in Mijdrecht. People sit in groups at tables. Strings of lights hang from the ceiling and a red curtain on the wall is reminiscent of a performance that could start at any moment. “We can be together again.” With these words, journalist Jeroen Dirks opens the first election debate in De Ronde Venen. All eight political parties are present. Ready to start the conversation about culture.

The evening was organized by Aino Merits of De Ronde Venen culture point. In her introduction she immediately puts the first problem on the table: the foundation has no accommodation. For example, it is difficult for them to structurally realize the art and culture offer. The arrival of a cultural center in Mijdrecht would be a great solution. The audience applauds in agreement.

This is the reason for Dirks to put forward a first statement: “Is art and culture a public government responsibility or should they be left to market forces?”

Wim Stam of the ChristenUnie/SGP makes a bold remark. “An artist has to suffer because that’s how he makes the best art”. After a hum from the room, he emphasizes that it is a joke and that his eyes have been opened due to the corona crisis. “As politicians, we shouldn’t always think we know what’s going on. Let’s ask the people in the field what they need.”

Dirks wonders whether that does not encourage a kind of job application feeling among artists. Who can best sell their problem? As if the first application round has started immediately, accordionist Wim Holla takes the floor. For seven years already accompanied the elderly with the singing of songs.

“We gathered together in the Willestee. It was a kind of fraternization. All that has gone wrong because of corona. Corns have fallen apart. The spaces had to get bigger in order to keep distance. If we’re lucky, we’ll cut the expenses.”

Can subsidies be made available to keep these kinds of initiatives alive? What Pieter Kroon of GroenLinks/PvdA does. “There is a lack of ambition in the town hall. The discussion is only about how we can prevent the budget from shrinking.”

During the discussion, Mr. Holla continues to stand behind the microphone. Listening to the debate about his sector. He is talked about a few more times, but he does not get the word anymore.

To get into the cultural atmosphere, there are musical intermezzos by Judith Beuse and Frans van de Vijver. They call it Easy 1940s jazz. “You are allowed to cut your fingers,” Beuse encourages the audience. Soon the cheerful snapping of dozens of fingers is heard.

The statements are interspersed with questions and comments from the audience. Singing pedagogue Greetje, for example, says that music is far too expensive for children. “Music education must become more constant, not just a little project here and there.”

Simone Borgstede of the CDA believes that people should first try to solve their problems themselves. “That is exactly what you are good at: creative thinking. First, look at what’s already there.” The audience shouts that the problems are too great for that. “Creative thinking”, Borgstede continues to emphasize.

Just as the dissatisfaction in the hall increases, bitterballen are handed out and it is time for two jazz numbers. Glasses of wine and tea are sold. The founder of the Umbrella Foundation talks about practice rooms that they can offer. During the break she joins accordionist Holla. Perhaps creative plans are being made.

The other side of the highway

After the break, a new statement takes center stage: “The different traditions of cultural participation in the cores and the vastness of the municipality should encourage more investment in bonding and cohesion through artistic and cultural activities.”

Eelco Doorn of D66 disagrees. Art and culture responds to the identity of a village, and that differs per core. “I have a brother dead from that whole connection because that actually stands for budget cuts.”

Astrid de Graaf would also like to say something about connection in the municipality. She is from Abcoude and teaches art education. “I’m annoyed green and yellow,” she begins. “Tonight I hear ‘over the highway’ and ‘on the other side of the highway’ all the time.. As Abcoudenaren, we are just hanging around a bit. That has been the case for years. Can we please stop that?” There is clapping.

“We have to do it together”, continues De Graaf. “If a street festival is organized in Mijdrecht, bring those artists to Abcoude. That is De Ronde Venen for me. All noses in the same direction.”

Not all parties agree. “All municipalities have their own history. Art and culture don’t have to be the same everywhere,” says Wim Stam of SGP/CU. Simone Borgstede adds that “people on this side of the highway can also learn from Abcoude”. “Ho ho,” the audience responds, “we don’t say that anymore.”

The pennies: “not a big bag of money”

A recurring theme is the question of whether there should be a culture house in Mijdrecht. That also means more money on the shelf. The parties are not very specific about their plans. When all propositions have been discussed, debate leader Dirks wants clarity: will there be money or not? He goes through all parties one by one.

Marja Becker of the Senior Party says that she “will invest money for concerts and plays”. The audience laughs at that last word. “What they’re doing here is a play,” a man tells his neighbor. That’s not what she meant, Becker emphasizes.

Simone Borgstede of the CDA says: “I am not a crowd pleaser. We need many things. It is important that we pay attention to art and culture. But I’m not going to promise a culture house, that’s not realistic.”

Wim Stam of the CU/SGP also does not want to promise anything now: “I am not Sinterklaas, I am not going to put a big bag of money on the table. We have to stay sober and realistic. If a good plan is put on the table, I will definitely listen.”

Margareth de Wit of the VVD agrees: “It must be feasible. I still think that own strength is important. People should first see for themselves what they can do.” 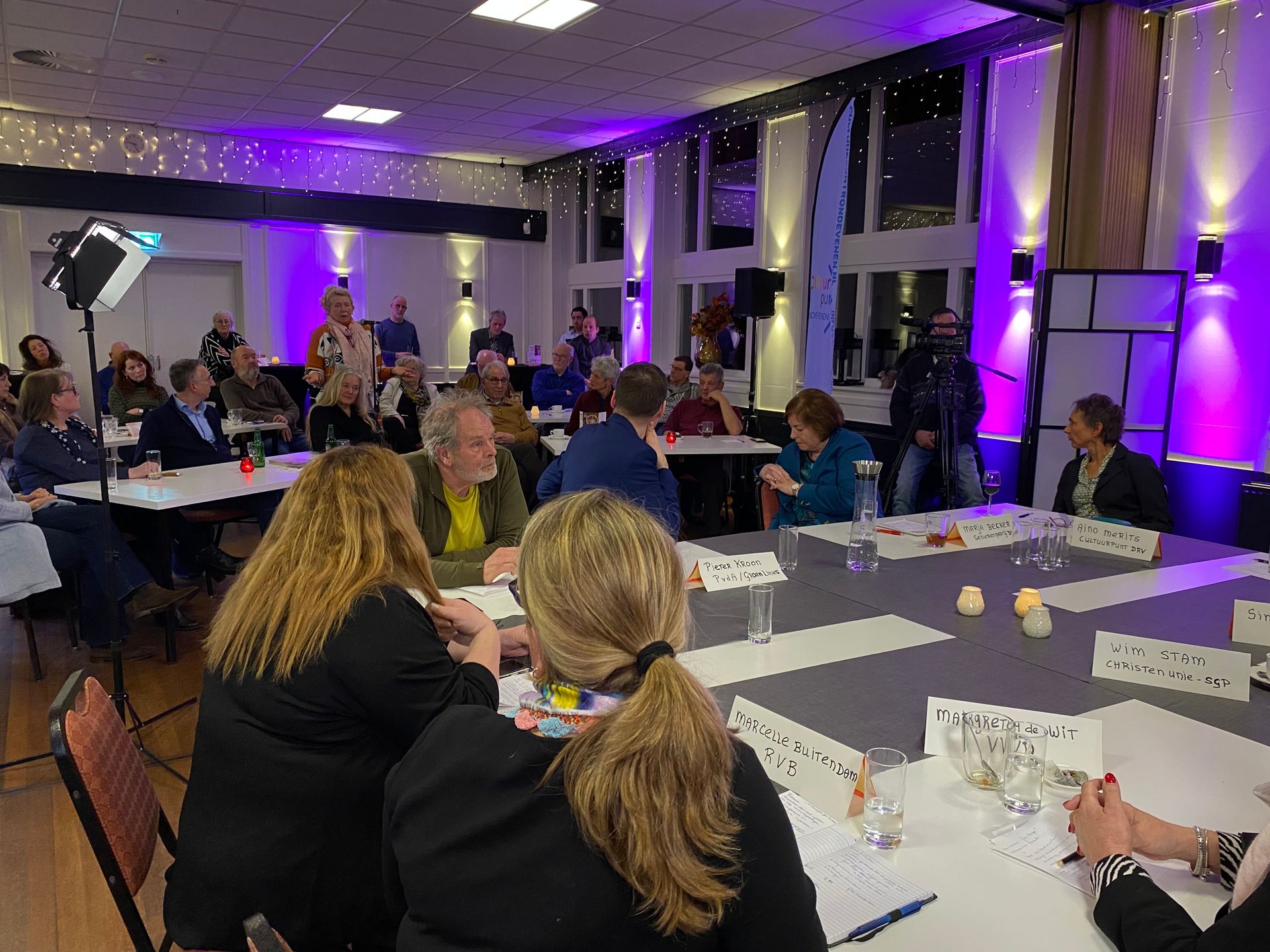 Marcelle Buitendam of Ronde Venen Belang is willing to grab the wallet: “Only two tons go to this sector.. poo poo .. I think that is really too little.” Dirks asks in concrete terms: “So much more money can go?” Buitendam nods in agreement.

Annemieke Groen of the new Residents Collective party also wants to give more money, “but it has to go to the right causes. There must be a connecting factor with all residents. And those residents should also have something to say in the whole.”

Eelco Doorn of D66 says it is best to ask the residents to contribute a little more: “We just have to allocate more money for this sector.”

Pieter Kroon of GroenLinks/PvdA concludes with three clear points: the cutbacks must be off the table, the cultural center in Mijdrecht must be built and “we must dare to opt for ambition.”

Dirks’ last question: “As political parties, are you prepared to make a financial contribution to the next political culture café?” There is silence for a while. Then everyone starts talking at once. Marcelle Buitendam of Ronde Venen Belang says with a laugh that she does bring a few bottles of cola. It’s the end of the debate.

“One wants to help finance and the other calls on the creativity of the artist,” Dirks concludes. But everyone agrees on one thing: “We are emerging from the corona crisis and culture must once again be given an important place in the debate.”

The evening will be concluded with a hopeful message for the art & culture sector. Now that the world seems to be opening up again, there is more perspective. The last song is played and the music duo encourages everyone to sing along. “One more time together: “And I think to myself.. what a wonderful world.”