The growth of ghost kitchens seems unstoppable. In fact, the segment already covers a multi-billion dollar market worldwide. Which developments are visible? Trendwatcher Gijsbregt Brouwer takes us along: from hybrid virtual brands to collaborations with celebrities.

What type of ghost kitchens are there today?

Most ghost kitchens are specially equipped for delivery, sometimes as large shiny new high-tech production kitchens. The prototype is Rebel Foods, which has been around for almost ten years and already has more than 350 kitchens in India, Indonesia and England, among others. Another example is the kitchens of Deliveroo Editions from the delivery platform of the same name. These can be found worldwide and more locations are planned.

In the Netherlands we also know Bright Kitchen, which has developed its own brands for delivery (virtual brands) and has the ambition to have fifty delivery kitchens throughout the Netherlands by 2024, and the ‘food incubators’ of Kitchen Republic (Amsterdam) and Food Union ( Rotterdam and Haarlem). You will find a mix of the two at the new The Kitchen Dojo (Rotterdam): founder Junior Lugte selects entrepreneurs who want to grow together to multiple locations.

We also see ghost kitchens in garage boxes and existing kitchens that have spare capacity, such as hotel, catering or institutional kitchens. Finally, there are the large existing ready-to-eat meal makers, such as caterers and producers of fresh meals. Recently, they have also moved further towards delivery. For example, Vermaat is testing on a large scale with delivery from the various kitchens under its management.

Where are ghost kitchens located?

They are strategically located with good reach for delivery. Draw a circle around the kitchen, count on ten to fifteen minutes of delivery time on the e-bike and then you want to be able to reach as many customers as possible. Most ghost kitchens can now be found in large cities, where many (young) consumers order easily. The rise of virtual brands is also taking place outside the major cities.

Virtual brands are food brands that have been developed for the digital delivery world. Dishes are often prepared in ghost kitchens or in existing catering establishments. The brands of Bright Kitchen in Amsterdam (such as Vegan Burger Brothers) and of Eat Casper in Belgium (such as Barney Burgers) are good examples. There are also ‘hybrid virtual brands’. Then an entrepreneur takes an existing formula that does have physical business and rolls it out in places where there are no businesses of their own.

For example, catering entrepreneur Herman Hell sells his Sugo pizzas from five of his own businesses in the major cities, but he has also given ten entrepreneurs with space in the kitchen the opportunity to bake, sell and deliver Sugo pizzas. The Amsterdam burger shop Thrill Grill by Robert Kranenborg supplies its burgers from a local catering business in Rotterdam, for example.

A well-known example from the United States is Nathan’s Famous Hot Dogs, which now has more than fifty virtual stores outside New York City. An advantage is that (hybrid) virtual brands can be launched quickly and at low cost. No real estate is needed and sometimes not even your own staff (you hire that). Practically everything can be done digitally. This is also a disadvantage, because the number of virtual brands is growing rapidly. There are already 100,000 virtual brands in the United States.

How can a virtual brand still be distinctive?

Distinction is needed to stand out from the consumer. For example, Bright Kitchen focuses on vegan. We also see many partnerships, such as collaboration with a celebrity, an influencer or (online) media brand. For example, there is the much-discussed concept MrBeast Burger. Here, a food service company teams up with MrBeast, a well-known American influencer with more than 54 million followers on YouTube. He launched his virtual brand, via his own YouTube video, which has already been viewed more than forty million times. Millions of his burgers have now been sold in 300 virtual ‘restaurants’.

Other examples are the partnership between the well-known Instagram account @pizza and 150 pizzerias across the US. Even Mariah Carey has her own virtual cookie brand, in collaboration with restaurateur Robert Earl’s Virtual Dining Concepts. Finally, it is also important to distinguish yourself: marketing, such as purchasing social media advertising or by purchasing a better place on the delivery platforms.

Is a ghost kitchen or virtual brand something for me as a catering entrepreneur?

A ghost kitchen requires a lot of capital. After all, you have to have a professional production kitchen set up and rent real estate. A virtual brand requires little investment and offers opportunities for extra turnover (and margin). Certainly in less densely populated areas, where only one or two concepts are offered, it makes sense to give consumers more options.

Entrepreneurs can respond to this with concepts they have developed themselves or those of large suppliers or wholesalers. Another opportunity is to offer your (partly) empty or underused kitchen to virtual brands that are looking for expansion.

What is the future of ghost kitchens? 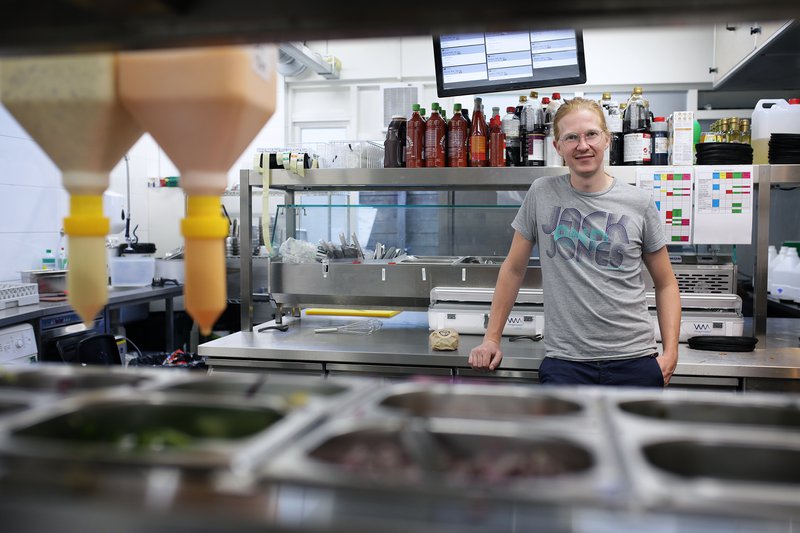 Ghost kitchens already cover a multi-billion dollar market worldwide. The research bureau Euromonitor expects that by 2030 it will be a market of one trillion dollars.

With this, part of the foodservice industry will take place virtually: from the data that shows which dishes are needed in a certain area, to the recipes that are sometimes rolled out all over the world. But also think of the preparation that will be increasingly automated and even robotized, the marketing and the way of ordering, payment and delivery. These will take place more efficiently and in more detail.

Does a ghost kitchen still fall under catering?

With the best will in the world, the virtualization of eating ‘out’ cannot be compared with the classic going to a restaurant. It is a new form of food service, driven by a cocktail of influence of social media, technology and venture capital. A form that has landed well with consumers, partly because of the pandemic, but especially because of the enormous convenience that delivery offers. So it is catering, but not as we are used to.

WHAT IS A GHOST KITCHEN?

When delivery dishes are prepared in a (professional) production kitchen that is only focused on the delivery of meals, we are talking about a dark, ghost or cloud kitchen. Named after the company’s former Uber CEO Travis Kalanick, who has already pumped hundreds of millions into buying real estate and furnishing kitchens worldwide.